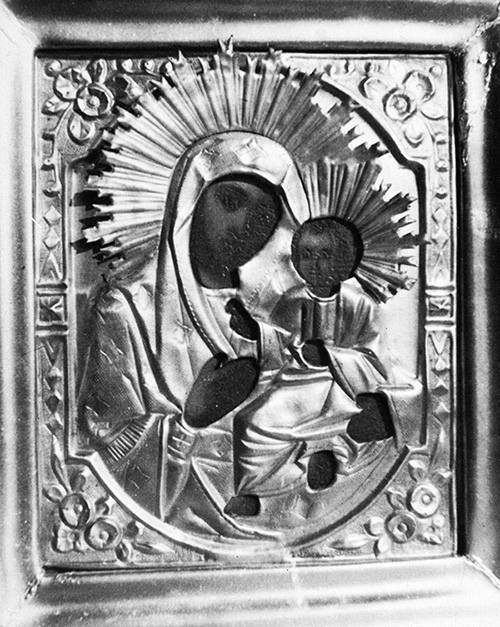 There are two stories behind the ikon of Our Lady photographed above. We were taking a day off to explore Kangwha Island which was the first part of Korea where the Anglican mission had any considerable success. The first place we visited was the church of St. Peter and St. Paul in Kangwha town, built by Mark Napier Trollope and consecrated in 1900. This must be one of the oldest and is certainly one of the most beautiful Christian church buildings in Korea. The ikon of Our Lady was not in its accustomed place above the centre of the sanctuary screen, and after a search it was found in a corner of the sacristy. It was dusty and tarnished almost unrecognisable: the parish priest, Father Paul Im, gladly gave us permission to take it home with us, for it needed more attention to restore it than could be given then and there. We mended its broken frame and polished and repaired its brass-work—cleaned the ikon itself and gave it a new cloth backing as the original one was in holes. Jo Roberts provided lacquer to preserve the polish on the brass and gold paint for the frame. There is nothing aesthetically remarkable about this particular ikon. Similar ones were made by the thousand in nineteenth-century Russia. But by the time we had finished it had a radiance which pleased us, and we felt that Our Lady was pleased too. In Orthodox theology the ikon is a vehicle of grace, a meeting-place between the pilgrim believers and the saints in glory and we had a sense of this while the Kangwha ikon was with us. We were able to send it back home exactly a month after we found it. Aesthetically remarkable it is not, but this ikon has a history which makes it remarkable for the Korean church. It was brought here by Dr. Eli Barr Landis who came to Korea with Bishop Corfe when he first landed at Chemulp’o (Inch’on) in 1890. The ‘little doctor’ is one of the saintly heroes of the first days of the Mission and the ikon is precious because it was his. Dr. Landis died in Chemulp’o aged only thirty-two on April 16th 1898 and Mark Trollope enshrined his ikon in the new church in Kangwha Town some twenty miles away. It seems worthwhile to take this opportunity to recall Dr. Landis’s work in Korea and his short life of hidden holiness.

He was born at Lancaster, Pennsylvania, into a Mennonite family that had emigrated in the seventeenth century, probably from Holland to avoid religious persecution. He did his medical studies at the University of Pennsylvania in Philadelphia and there came in touch with the Society of St. John the Evangelist at St. Clement’s church. He was converted, baptised and confirmed there and it was Father Benson himself who first suggested that Dr. Landis should join the new mission of the Church of England to Korea. Bishop Corfe was very anxious that medical work should begin immediately. He had decided, as far as direct evangelism was concerned to impose a rule of six years silence on the original members of the mission; but by means of hospitals and dispensaries he hoped to go ahead directly and teach the Koreans that God loves their bodies as well as their souls . . . ‘we are trying to bring them to Christ by teaching them how sacred is that body which will by and by be baptized and made a member of the great Body of Christ . . .’

So as soon as they arrived Bishop Corfe began a series of journeys to set the work going in Seoul and elsewhere and Dr. Landis settled in Chemulp’o to treat the patients who came to him in great numbers and to learn the language. In this he rapidly made progress which others thought phenomenal. Even before he left America he was puzzling out all he could about the Chinese and Korean languages from a cyclopaedia in the Cowley Fathers’ House in Boston. At Christmas 1895 as he left for his only furlough he said his greatest pleasure would be his next sight of Chemulp’o. He was back by early May 1896, anxious for the welfare of the orphan boys who lived with him, one of whom he had adopted. For their sake and in order to further his Korean studies, he moved in 1897 to a house in the Korean area of the town, away from the English parsonage and the European settlement. This probably precipitated his death for the site was unhealthy and the water-supply unsafe.

Equipped with fluent Korean and a good knowledge of Chinese characters he explored many curious by-paths of Korean life and literature. Buddhism, geomancy, nature and devil-worship, native medicine, proverbs, social customs and national history is the list in Mark Trollope’s memoir of him. He collected the rhymes he heard children using and published a paper on them in the Journal of American Folklore. He produced twenty articles on different topics between 1895 and his death. He learned bookbinding, he taught English to Japanese. There seems no end to his activity and enthusiasm. Was it wasted?

The memoir concludes: ‘those who believe in the communion of saints will know that his beneficient activity . . . differs from what it was here only in being infinitely more prevailing and more intense. The discipline and training … are bearing fruit in another world . . .’

We can be sure that his prayers for Korea in 1972 are joined with Our Lady’s own.