Jacob Motz or Moots was a German-speaking Lutheran stonecarver active between the late 1760s and the early 1780s. His surviving work is present in 37 examples in 11 churchyards in what are now Northampton County and Lehigh County in Pennsylvania, and Warren County in New Jersey. (At least two of his stones were destroyed by bulldozers on the orders of a congregational council in 1974.) Almost half of the stones are in the cemeteries of Zion Stone Church in Kreidersville and the former Christ Union in Lower Saucon, Hellertown.

Motz’s work was identified as belonging to one individual as early as 1954 by Preston Barba; he was identified by name in December of 2019 by Richard Mammana using probate settlement documentation in the Northampton County Court Archives. Before 2019, Motz was known only as the “Northampton County Carver.” The stones, some of which are in advanced states of deterioration and lichen encrustation, have the following characteristics in common:

1. The text of the epitaph is in German with idiosyncratic spelling.
2. The material is local sandstone.
3. The stone was carved between 1768 and 1782.
4. A characteristic vase with flowers features on the reverse.
5. The text on obverse has majuscule and minuscule lettering mixed within words.
6. Stylized sunbursts in corners.
7. There are occasional dates on the obverse that correspond to the date of erection or completion, not the decedent’s date of death. 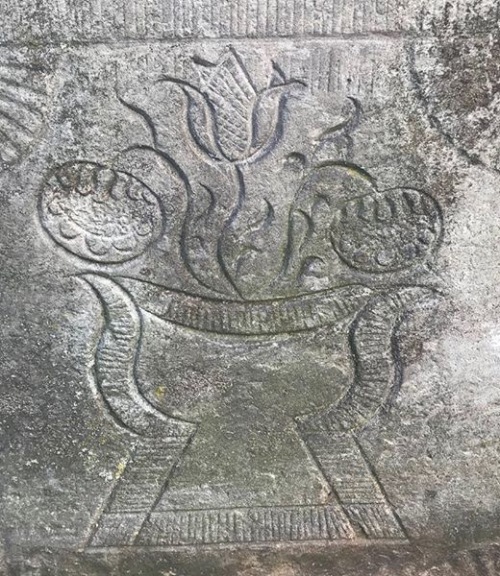